Bitcoin Down Dramatically So Far This Year, Should You ‘Buy the Dip’? 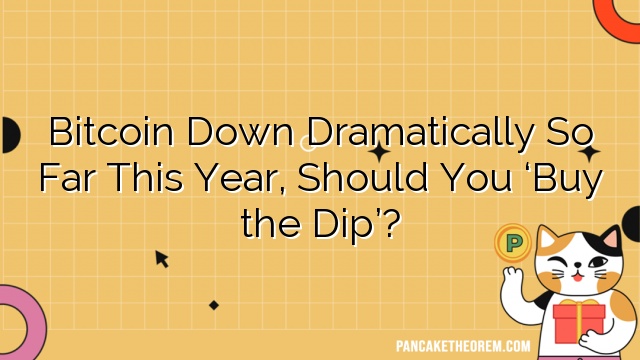 Cryptocurrencies look to be in the midst of a big correction as Bitcoin dipped below $33,000 for the first time in around a year this week, with Ethereum (ETH) and Cardano (ADA) also falling.

Investors may now be seeking for a piece of the volatile crypto market in the expectation that this indicates a short slump rather than a long-term bear market, given the ancient financial adage “buy the dip. “

Look at prior patterns and get some professional advice if you’re thinking about getting in on the cryptocurrency action right now.

Cryptocurrency is a digital payment mechanism that does not depend on financial institutions to authenticate transactions. It is a peer-to-peer technology that allows anybody, anywhere, to send and receive funds. Rather than being actual cash carried around and traded in the real world, cryptocurrency payments exist only as digital entries in an online database recording particular transactions. The transactions involving the transfer of cryptocurrency money are recorded in a public ledger. In digital wallets, cryptocurrencies are kept.

The term “cryptocurrency” was coined because transactions are validated via encryption. This indicates that specialised coding is required for storing and sending bitcoin data between wallets and public ledgers. Encryption’s purpose is to provide safety and security.

The first cryptocurrency was Bitcoin, which was created in 2009 and continues to be the most popular. Speculators may drive the values of cryptocurrencies into the stratosphere due to the widespread desire to trade for profit.

In 2018, Bitcoin lost 80% of its value, and although this hasn’t yet reached that level, analysts predict things might get worse for anyone still holding BTC.

Crypto investors have been warned by the Financial Conduct Authority (FCA) several times about the risks of losing money in the cryptocurrency market. It warns that no investment can be guaranteed to provide a profit, and that investors should be prepared to lose all of their money.

Bitcoin Facing Similar Issues to Other Areas of the Economy

Oleg Giberstein, co-founder of Coinrule, an automated crypto trading platform, believes that crypto is experiencing the same challenges as the rest of the economy, which is why prices are falling.

“Everything is down, and the economic forecast is bleak over the next 6-12 months,” he stated. Slow economic growth and rising inflation have put Central Banks in a predicament. The result is that “risk-on” assets like bitcoin and tech equities are being shunned by investors.”

However, Giberstein cautioned that things may become much worse over that period, so it’s impossible to know if this is the beginning of an ongoing trend or just an isolated blip.

As Luno’s Sam Kopelman put it, “Falling below $30,000 puts bitcoin on the edge of a major support level,” Bitcoin’s downfall was not an isolated event. If Bitcoin goes below this level of support, it might fall as low as $25,000 before making a strong recovery.

Global stock markets had their worst day since June 2020 on Tuesday, with investors dumping assets across the board.” In addition to increasing interest rates in the United States, the market is dealing with the fallout of the ongoing turmoil in Europe.”

Interest rates and crypto prices are expected to be affected by inflation data released this week by the US Labor Department and the UK Office for National Statistics….

When it comes to market movements, Kopelman anticipates more clarity to come from headlines out of the US and UK, but also predicts a tumultuous week ahead.

How to buy cryptocurrency

If you’re still interested in ‘buying the dip’ then you may also be figuring out how to acquire Bitcoin, Dogecoin, Ethereum, and other cryptocurrencies might be initially difficult if you’re new to the crypto world. Signing up for an exchange like Coinbase or Binance and setting up your account with funds is all that’s required to learn the ropes.