What is Ripple XRP and Should You Buy It? 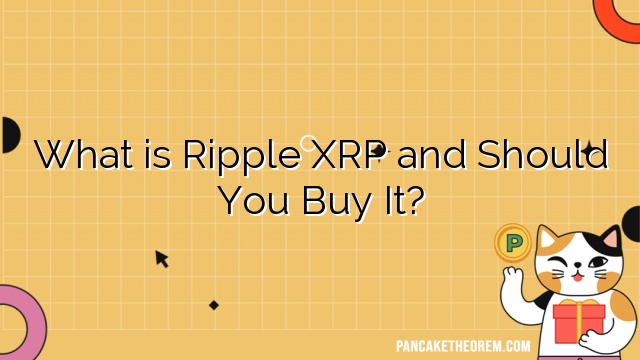 Ripple is a network for money transfers developed to meet the requirements of the financial services sector. XRP, a cryptocurrency designed to operate on the Ripple network, is among the top five cryptocurrencies by market capitalization.

In this post, we’ll be covering what Ripple is, how it ties in with XRP and whether it’s a good idea to invest in it.

What exactly is Ripple?

Ripple is a global payments settlement system and currency exchange network capable of processing global transactions. The concept is that Ripple acts as a trusted intermediary between two parties in a transaction since the network can swiftly validate that the exchange has place successfully. Ripple can ease the exchange of several fiat currencies, cryptocurrencies such as Bitcoin, and even commodities such as gold.

Pat White, CEO of Bitwave, explains, “Ripple was built from the outset to be a substitute for SWIFT (a prominent money-transfer network) or to otherwise replace the settlement layer between large financial institutions.”

El Lee, board member of Onchain Custodian, explains, “The usual transaction price on Ripple is 0.000001 XRP, which is negligible compared to the high fees imposed by banks for cross-border transfers.” As of late April 2021, the XRP price per token was £0.97, resulting in a transaction charge of only £0.0000097.

XRP is a digital asset that operates on the XRP Ledger, a blockchain designed by Jed McCaleb, Arthur Britto, and David Schwartz. McCaleb and Britto would eventually form Ripple and utilise XRP to conduct network transactions. You may purchase XRP as an investment, a currency to swap for other cryptocurrencies, or a means to fund Ripple network transactions.

Notably, the XRP blockchain runs somewhat differently than that of most other cryptocurrencies. Other cryptocurrencies make their transaction ledgers and verification procedures accessible to anybody who can rapidly solve difficult equations, while Bitcoin transactions are safe because the majority of ledger holders must approve the verification before they are added.

Instead, the Ripple network centralises things somewhat: While anybody may download its validation software, it maintains what it refers to as “unique node lists” from which users can choose to verify their transactions depending on which participants they believe are least likely to commit fraud against them. Its current default list has 35 trustworthy validators. Ripple selects the validators to be included on this list and also comprises six of these validation nodes. Users may opt out of this default list and remove Ripple-backed validators from their transactions completely, establishing their own lists of trustworthy validators. This would enable the network to continue approving transactions even if Ripple the firm ceased to exist or became inactive.

As new transactions arrive, validators update their ledgers every three to five seconds to ensure that they are consistent with the other ledgers. If a mismatch occurs, they halt to determine what went wrong. This enables Ripple to swiftly and securely validate transactions, giving it an advantage over competing cryptocurrencies such as Bitcoin.

Lee states, “Bitcoin transaction confirmations may take many minutes or hours and are generally accompanied by large transaction fees.” “XRP transactions are verified within four to five seconds at a significantly reduced cost.”

Ripple has an array of advantages, some of which may be appealing to investors and other businesses considering adopting Ripple payment.

While there are an enormous amount of benefits of Ripple not even covered in this post, there also comes a handful of disadvantages too, some of which are as follows:

How to make use of Ripple and XRP

XRP may be used in the same way as any other digital currency, either as a medium of exchange or as an investment. Other types of transactions, such as currency exchanges, might be carried out over the Ripple network in the future.

As an example, if you wish to exchange British pounds for Euros, you can utilise the Ripple network to convert your GBP into XRP, which you can then use to buy Euros. In comparison to paying the extortionate costs that banks and money transfer businesses may levy, this is a far faster and less costly option to do business with.

How to Mine XRP

Most blockchain-based cryptocurrencies use “mining” as their distributed verification method. It also offers the process by which additional money is introduced into a cryptocurrency system, generally as a reward for verifiers’ labour maintaining the network. Bitcoin, for instance, has a total supply cap of 21 million tokens, which are constantly distributed as more and more transactions are validated.

In contrast, XRP was “pre-mined,” which means that the XRP Ledger generates 100 billion tokens that are regularly issued to the public. As an incentive to assist the cryptocurrency’s growth and long-term success, Ripple holds around 6 percent of the total supply. About 48 percent are retained in reserve for regular release into the market through sales.

Should You Buy XRP?

In spite of this, White is afraid that the SEC’s investigation into XRP might make it more difficult for people to invest in the virtual currency.

However, they are fighting the SEC and trying to position themselves as an intermediary in the settlement process for regulated companies. In the meanwhile, “no one can use XRP until Ripple settles its legal difficulties,” added the analyst.

It’s not advisable to invest in XRP if you’re afraid of losing your whole investment. “The SEC announcement caused the price of XRP to collapse,” he notes, making this cryptocurrency an extremely dangerous investment until the SEC problems are handled.

XRP may be a good investment if you believe that Ripple will triumph in its legal battle with the SEC and continue to be a dominant payment system. Do not risk more than you are willing to lose when you bet.