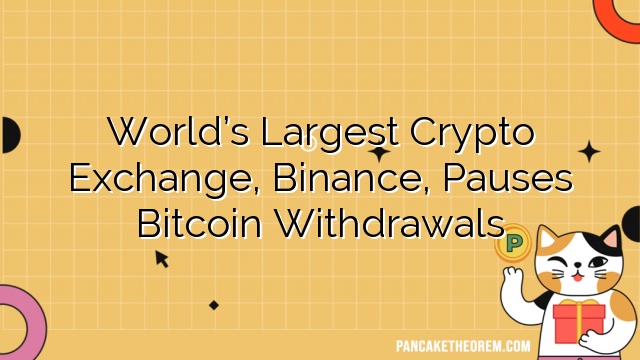 Amidst a significant market correction, the largest cryptocurrency exchange in the world, Binance, has “paused” its customers’ ability to withdraw Bitcoin.

The so-called “temporary” suspension came about when Celsius, the second largest cryptocurrency exchange, froze all withdrawals in the early hours of the morning due to “severe market circumstances.” The market’s managers characterised the situation as being “intense.”

The cryptocurrency lender Celsius, which operates in a manner similar to that of a bank, said that it was “taking this essential measure” for the sake of the broader cryptocurrency community in order to stabilise liquidity and business operations.

The cryptocurrency exchange Binance said that it halted trading in Bitcoin due to a “stuck transaction,” adding that the suspension did not impact trade in any other cryptocurrencies.

Additionally, Celsius said that its 1.7 million customers will continue to accumulate awards even when their accounts were temporarily disabled.

After the statement, the cryptocurrency markets went into a downward spiral, with Bitcoin reaching its lowest level since December 2020, which was somewhere about $20,300.

Ether, the second-largest cryptocurrency in the world, had a decline of more than 8 percent, reaching a price of $1,303, which is its lowest level since March 2021.

According to the website that tracks cryptocurrency prices, CoinGecko, Celsius’s native CEL coin had a 73% loss overnight and is now valued at $0.19. According to the data from April, the token probably had a value of around $3 at that time.

Because of its size, Celsius is exposed to a significant chunk of the cryptocurrency markets. In fact, last year, the lender took out a loan of $500 million from Tether. Tether is a kind of cryptocurrency referred to as a “stablecoin.” Its value is linked to that of the dollar, a currency that is used in the real world. This morning, the value of Tether remained relatively unchanged, having moved from $0.999 to $0.998 during the course of the previous 24 hours.

According to the information provided on its website, as of the 17th of May, Celsius had processed loans totaling $8.2 billion and had assets worth $11.8 billion. According to a report from Reuters, Celsius said in August of the previous year that company had assets worth more than $20 billion.

The lender operates similarly to a conventional bank in that it takes deposits from users, uses those deposits to calculate interest, and makes cryptocurrency loans.

This morning, an advertisement posted on the website guaranteed a return on investment of 18 percent, which would be distributed over many different token trading instruments.

In the month of May, the Terra cryptocurrency was among many that were affected by the “Black Wednesday” that affected the digital token markets.

Terra, a stablecoin that is analogous to Tether, saw a collapse that shook the cryptocurrency markets when a weakness in its model that had gone unreported up until that point caused a drop in the value of a connected token, bringing Terra’s value down with it.