Cesius is Crashing and We Look at Why 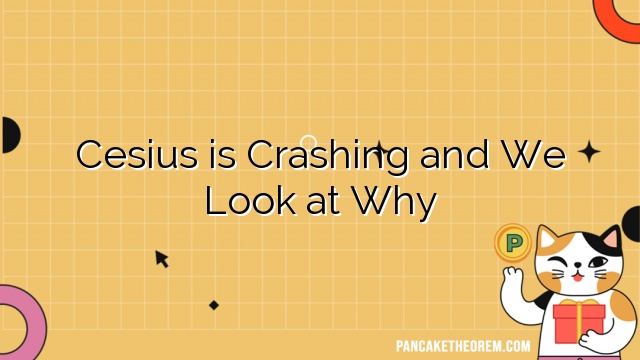 Following the example of Terra, it’s possible that another cryptocurrency may see the most severe drop in value to date. The native cryptocurrency of Celsius Network, CEL, is now experiencing a precipitous decline, which is leading investors in cryptocurrencies and the industry as a whole to be concerned. The fall of the CEL is another reason for worry since the adverse impact it had induced volatility in the Ethereum market (ETH).

The cryptocurrency market is in a free fall situation all because to the mismanagement of Celsius Network, which came at exactly the worst time for the market, since the scars from the Luna collapse are still raw.

What really brought upon the widespread concern in the crypto community?

The decline of Celsius may be attributed to a number of different causes and contributors. However, these considerations are only the foundation of our research based on a variety of sources; it is possible that there are additional interpretations that are not consistent with our study.

The recent meltdown of Terra Luna caused a lot of worry among investors, and the cryptocurrency market was already dangerously close to imploding before it happened. In reaction to this adverse mood, panic selling spread like wildfire, with many making the assumption that ETH and stETH were operating on a similar basis based on the example of UST de-pegging. This led to a significant drop in the price of ETH.

Many individuals throughout the globe have a misunderstanding of the notion of stETH because they believe that ETH and stETH are equivalent to one another. In point of fact, nothing could be farther from the truth.

stETH is not linked to ETH, never was, and never will be; in fact, it has never even been pegged to ETH. It is not necessary to continue working at a 1:1 ratio. The price is determined by the demand for it and the supply of it on the market. Stablecoins and even algorithmic stablecoins are not the same thing as staking derivatives. Simply put, they are a tokenized form of ownership over secured collateral.

Role of Celsius in the current crypto market

Everything began when Celsius published a statement saying that company is blocking withdrawals, swaps, and transfers between accounts due to “extreme market circumstances.” The statement was met with significant pushback from the investors, many of whom expressed a desire to withdraw their money.

The Celsius platform has informed users via a blog post that it has triggered a condition in its terms of service that will block withdrawals. The article begins by stating, “We are working with a single focus to safeguard and preserve assets to satisfy our duties to clients.”

Why would a Cefi platform suddenly cease processing withdrawals for a significant amount of time at a period of unstable market conditions? In general, it is accurate; nevertheless, the cause seemed to be different this time based on the rumours around the data that was shown on the chain.

The recent sale of Alameda Research’s stake ETH bag seems to have wrecked havoc on the ETH:stETH liquidity pool of the Celsius network. Alameda Research is believed to have sold around 50,000 of its stETH holdings in exchange for ETH and then withdrew its holdings in stETH, according to a report.

There have been rumours that the recent withdrawals are rapidly diminishing the liquid cash held by Celsis, and these rumours have given rise to speculation. Investors have been cautioned by cryptocurrency experts that Celsius might run out of ETH money if withdrawals continue at the same pace that they are now occurring at.

At the time of the release, just 27 percent of Celsius’s ETH holdings on Curve were liquid, while the rest 73 percent of stETH or Staked ETH on ETH 2.0 were locked for up to a year. If the current rate of withdrawals of 50,000 ETH per week is maintained, Celsius will be depleted of its funds within the next five weeks.

Because Celsius maintains a policy of “no transparency” and has centralised control, this topic will continue to be shrouded in mystery, and we will never learn the truth. Celsius, like many other users, has suffered huge financial losses as a result of the most recent hack stage, Hound and Badger.

There are also rumours that Celsius had a significant amount of money invested in Luna, which resulted in a significant loss for Celsius when Luna collapsed.

It would seem that Celsius made the action in order to prevent a liquidity crisis from occurring inside its network. Surprisingly, a tweet from Celsius’s CEO, Alex Mashinsky, that is only one day old paints a different tale from his ‘No Withdrawal policy.’

Who does it affect?

Starting with Celsius, and along with it, the Celsius depositors could be ruined. Either they won’t be able to process withdrawals for everyone until after the merge, or Celsius will lose a significant amount of money by selling low in order to process withdrawals before the merge. Both of these scenarios are extremely undesirable.

In the event that their position is liquidated, all of the stakeholders in leveraged yield farming would suffer significant losses as well.

If a trader or investor staked ETH today (or bought “discounted” stETH today) and needed to exit in three weeks or three months, the stETH/ETH price is obviously not guaranteed to be the same as when they entered the market. This is an inconvenience for anyone who wanted to exit their stETH position before the beacon chain’s state transitions.
Because each stETH has a 1:1 equivalent ETH on the beacon chain, it is safe for holders of non-leveraged stETH who want to depart the system by unstaking on the beacon chain after all of the merge-and-etc actions have been completed.