How To Learn About Cryptocurrency: The Ultimate Beginners Guide 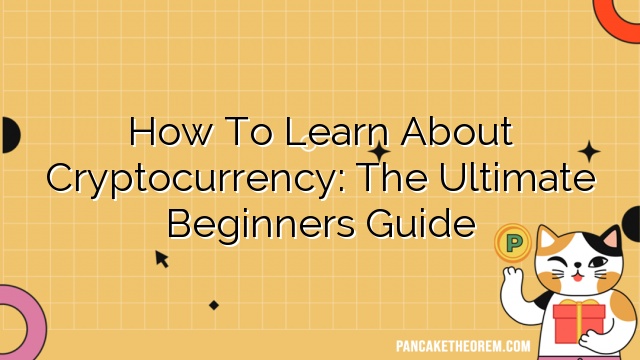 Cryptocurrency is one of the most exciting things to happen in the digital space. It’s a digital currency that can be used to buy things online.

If you’re looking for a simple way to get involved with this exciting space, this guide is your answer.

Here you’ll learn everything you need to know about cryptocurrency and how you can get started today.

What Is Cryptocurrency Anyway?

It’s hard to go a day in the world without hearing about crypto in some way, shape or form. The only problem is, the vast majority of people don’t have any idea what crypto currencies actually are. These are the same people who get slightly woozy just hearing the term ‘blockchain’, but don’t worry! All new technologies are confusing, at first, but it’s not impossible for everyone to learn.

If you’re interested in investing, then you should probably take the time out of your day to learn a little bit more about what it is. In doing this, you can figure out the risk-return ratios and decide what suits you best from an investment perspective.

In a nutshell, cryptocurrency is simply a form of currency with a twist, it is backed by the power of cryptography. What this means is that essentially it requires an enormous amount of computing power in order to crack it, so much power that more often than not hackers don’t bother as the pay-off isn’t worth the sheer effort.

Crypto currency only exists in digital form, and is stored in digital wallets. Each and every transaction is encrypted and recorded on something known as a digital log. Now, unlike traditional databases, the records are stored on a series of different computers known as nodes, often in the thousands, all at once. Making it a very safe and secure form of currency.

How Does Cryptocurrency Work?

The way that cryptocurrency works is through writing blocks and recording the transactions on a ledger, once recorded, these transactions cannot be tampered with in any way at all, making a transaction permanent.

What is a ledger I hear you say? Well, to put it simply, a ledger is a database which is public, online 24 hours of the day, 7 days a week and isn’t controlled by any third party medium such as a bank or government body.

The ‘crypto’ part of the naming simply refers to the fact that, as mentioned earlier, cryptography is used to secure the transactions. The reason this is used is due to it being extremely difficult to hack or break into.

Cryptocurrency works by writing blocks and recording transactions to a ledger. Transactions can’t be faked, or overwritten.

Now, if you take a typical bank account and use your card to spend £3 on a sandwich, your bank has a direct record of that transaction and can pretty much keep tabs on your spending. However, if you spend 100 satoshis (just the bitcoin equivalent of pence) on an online marketplace, the transaction is recorded in a block alongside other transactions on the blockchain.

Unlike real (fiat) currency, it is neigh on impossible to counterfeit any cryptocurrency, this is thanks to all of the computers on the network (nodes) having to “agree” in unison on what the correct version of the transaction is on the public version of the ledger.

When purchasing digital currency of your own, you also become the owner of a private key which gives you the ability to authorize any out-going transaction on the network and allows you to spend the funds, but if you lose that private key you also lose access to your money, unlike a typical bank that can just replace your card.

When you buy digital currency, you own a private key. This is a piece of code which authorizes outgoing transactions on the blockchain network so you can spend the funds.

Unlike its origin days, crypto can now be used to buy regular goods and services in the real-world as more adoption of the payment type is being seen throughout many retailers around the world, however, the majority of people who invest in crypto are treating them more like other assets such as stocks.

While most people will recommend you to invest your money into crypto, it can be a risky investment due to how volatile the market is but this risk can be negated through proper research and fully understanding how each system works.

What Is The Future Of Cryptocurrency?

Throughout 2022, cryptocurrency could see movements in either way. An upward trend could occur if regulators across the world agree and put in place a framework specifically for crypto regulation. For example, the Biden administration has currently organized a team of highly-qualified people to steer the process in the US.

As more and more people with a high knowledge get involved and begin to set the agenda for any future regulations, there becomes a real hope that the system could become a developed one that investors, consumers, crypto businesses and even traditional banking systems could get behind.

As governments across the globe solidify a legal framework and taxation system, people come to see crypto as a true way to invest, store and spend currency within a digital wallet on a large scale.

In 2021, crypto became legal tender within the country of El Salvador, however other countries haven’t followed suit just yet and it doesn’t appear that many will any time soon.

This hasn’t stopped a vast amount of retailers from accepting payments in digital cash, though. With many companies out there accepting payment for their services in Bitcoin, XRP, Ethereum and even Litecoin. The more adoption and usage of crypto assets in the real-world though will spearhead regulatory agencies and politicians to take action and work a way to integrate it into society effectively.

None of this is financial advice, but the future of crypto currency could definitely go either way at the moment and investors should weigh up the risks before dropping their life savings into it.

Read more: What is pancake swap?

How To Buy Cryptocurrency?

One of the simplest ways to buy crypto is through the use of an exchange. It’s always wise to do research before jumping onto the first exchange you see, though, as if you end up keeping your crypto within these exchanges and they go bankrupt, it could leave you without anything at all.

It’s always best to research the exchange before jumping into a decision. Some of the most popular and well-used exchanges in the UK are the likes of crypto.com, Binance & Coinbase.

What Was The First Cryptocurrency?

Bitcoin was the first cryptocurrency concept, and is commonly referred to as the founding father of the entire crypto-space. It was first outlined in principle by a person only known as Satoshi Nakamoto back in 2008 and has grown rapidly in popularity over the years, as well as other coins using similar technologies such as Ethereum and Litecoin.